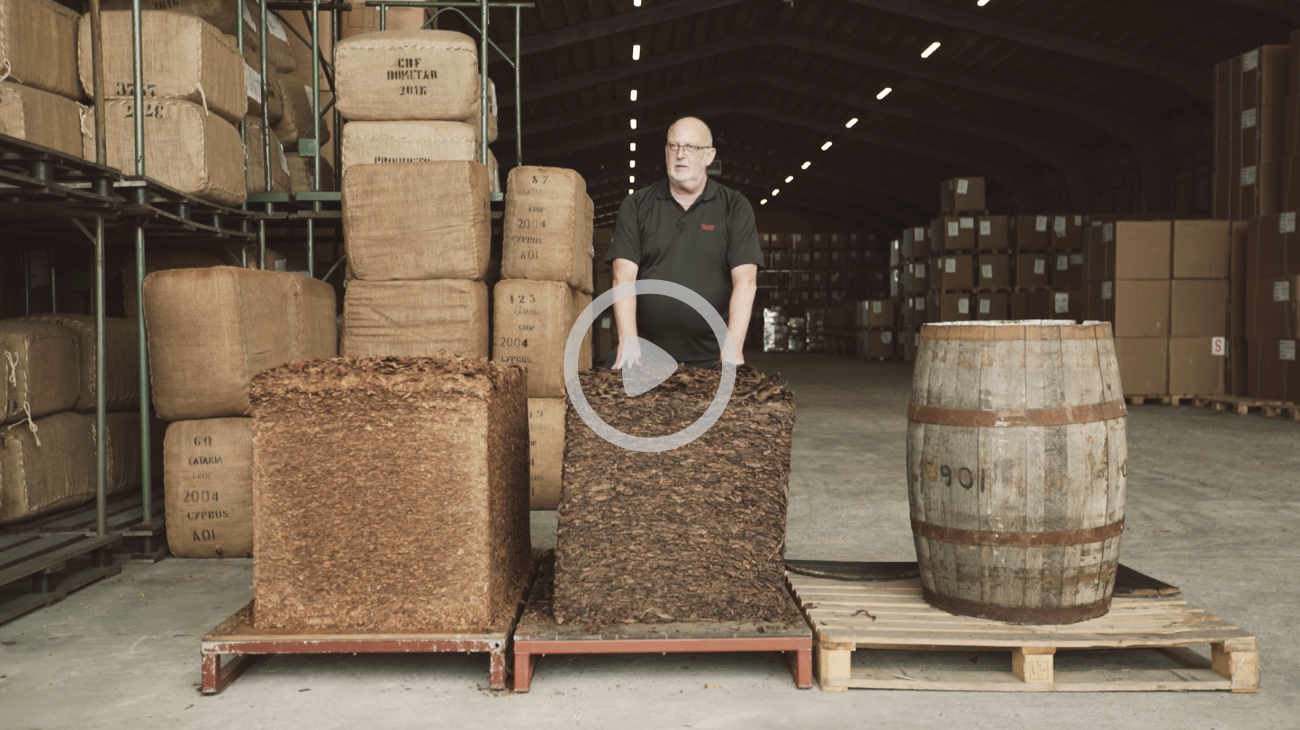 Burley became rather late a tool in the toolbox of the tobacco blender. The origin of Burley tobacco was credited to George Webb and Joseph Fore in 1864. They had brought seeds from Kentucky to southern Ohio, seeds from a tobacco plant that had developed other leaves than the normal tobacco grown in Kentucky. The leaves were thinner than those grown in Kentucky and the colour was kind of shaded from white to yellowish. The seeds were planted in a field and once they have been harvested the White Burley was born. Well, nobody calls it white Burley anymore, just Burley, and everyone recognises what it means.

When the time for harvest approaches, the Burley tobacco field is harvested using the stalk-cut method. This means that the whole plant is cut by the surface of the soil and at the widest end of the stalk it is speared onto a stick. One plant besides another, and when the stick is fully loaded with tobacco plants they are transported to the drying barn where they are hung in neat rows from top to bottom. The magic in drying Burley is simple, because due to the roof and sides in the drying barn the tobacco is not influenced by sunlight and normal air completes the drying process. It usually takes about 6 weeks for the plants to dry and during this period the colour of the leaves slowly change from green/yellowish to a darker brown colour.

During the proportionally long time in the drying barn, the sugar in the tobacco is broken down, so at the end the Burley has only slight traces, or in most cases, no sugar at all. Of course this has a dramatic effect on the taste compared to Virginia. Burley is lacking the sweetness found in Virginia tobacco.

So what is the smell and taste of Burley tobacco? The character is bolder than Virginia tobacco and it is a little dry with faint hints of cocoa. After the Burley has been processed, the taste is medium to full bodied, relatively dry and contains a clearer note of cocoa. The total intensity in the taste is determined from the leaf position; a leaf positioned high on the tobacco plant gives it a bolder taste.

However, Burley is not an anonymous participant in a tobacco blend, and it contributes with a variety of natural flavours and has a number of basic properties, some of which are quite remarkable. Without these basic properties many new blends would never have found their way into the pipes, but instead they would have been stranded on the table at the blender as a “not perfect” blend.

Burley and Virginia tobaccos very often have the same amount of nicotine; however you will get more nicotine from a neutral or alkaline smoke than from acidic smoke. For us who work with tobacco every day, this translates into: “If we want the blend to be a bit stronger, we add more Burley”.

Another important property is that the leaves of Burley are slightly thicker than Virginia leaves, and in the casing process this means that Burley tobacco can “drink” much more casing and top flavour. Pipe tobacco coming from USA very often is made out of more Burley than Virginia tobacco because of the ability of the Burley to obtain more casing. By doing this you will be able to make a more aromatic tobacco with a lot of flavour.

It might be that you find Burley tobacco boring and unappealing but never underestimate the magic that Burley does for a blend, sometimes almost undetectable, but it does its magic for your smoking experience. 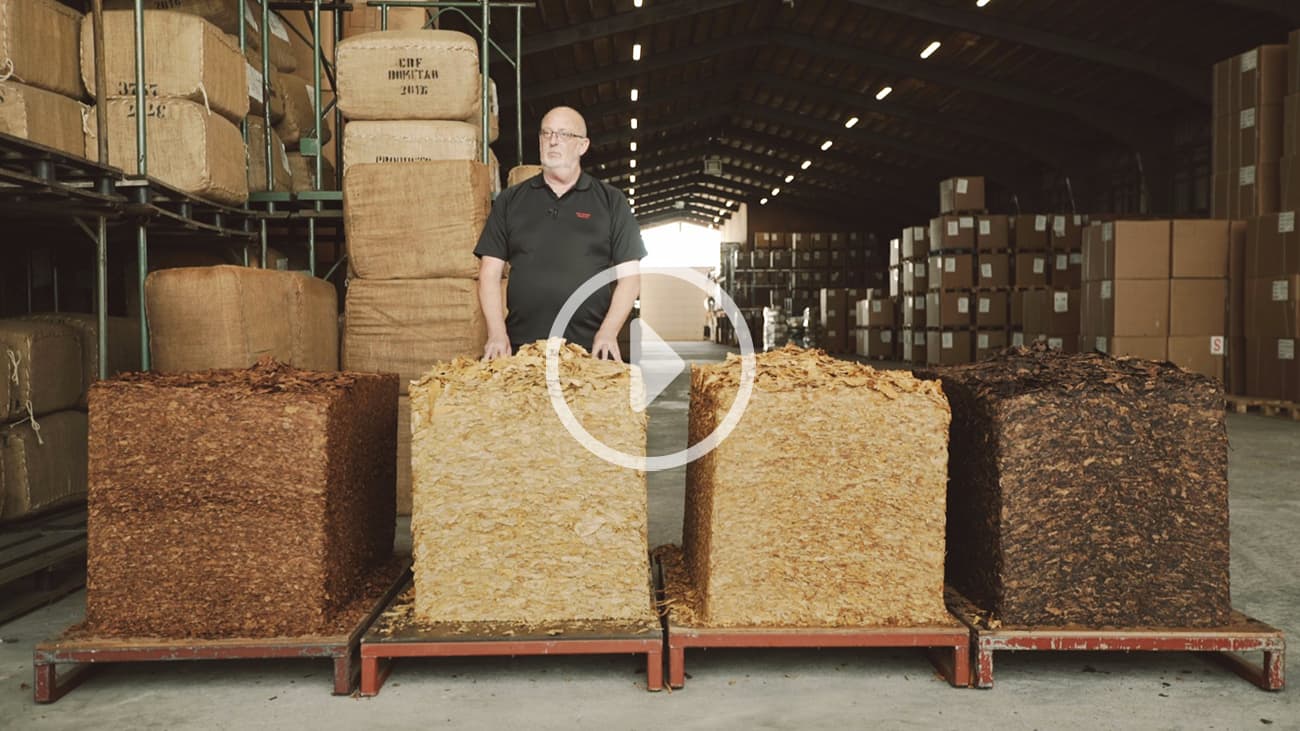 Tobacco seeds were brought to Virginia around 400 years ago and formed a variety of the Nicotiana Tabacum tobacco plant. Due to the soil the leaves grew thinner and had a lighter taste than the “Spanish tobacco” growing in the Caribbean area. It became an instant hit among pipe smokers and production constantly increased. Today Virginia tobacco is a component of pipe tobacco, cigarettes and Roll Your Own tobacco, which qualifies Virginia tobacco to be the most smoked tobacco in the world.

When you look at Virginia tobacco today it can be recognised by the bright yellow colour, but this was not always the case. From the start the Virginia tobacco was an Air-Cured tobacco, which means that the leaves were hung under a roof for drying. The period was normally 40 to 60 days before the leaves were completely dry. But this changed in the middle of the 19th Century. Around 1850 the concept of Flue-Curing was discovered and the new variant of Virginia tobacco was smoked with great pleasure. The success was so great that the Flue-Curing method rapidly spread among the farmers, and within just a few decades the traditional Air-Curing of Virginia tobacco was replaced with the new Flue-Curing. Flue-curing takes place after the ripe tobacco is harvested and – by controlling both heat and humidity in the drying barn – the tobacco will be dried out in about 5 days.

The curing methods are different, but how does that influence the taste of the Virginia tobacco? The Air-Cured tobacco did not contain any sugar which gave a slightly, dry mouthfeel, whereas the Flue-Curing secured the natural sugar to remain in the leaf. Sugar provides a natural sweet note to the Virginia tobacco, however, if the temperature by smoking rises too much, the sugar converts into acid. For both the pipe and cigarette smoker, this means that the smoke will be sharper and slightly irritating in the mouth.

Now, it sounds like we are only using one Virginia tobacco and nothing could be more wrong. In our warehouses we have over 100 different Virginia tobaccos, each with its own properties like nicotine content, sugar, thickness of the leaf, colour etc. All of the properties are in close connection with the region where it grew and the main condition for the tobacco are the soil, weather conditions, fertilizer and time of harvest.

As a farmer you have no influence over the first two because the soil is already there and the weather is what it is, never to predict. As for the time of harvest, the farmer has a large influence, and if he harvests just when the tobacco is ripe the tobacco will obtain a very light yellowish colour with a high content of natural sugar. This Virginia tobacco is weak in flavour and at Mac Baren we call it a filler Virginia.

If he waits to harvest until the leaf is overripe, he will end up with a darker leaf, more orange in colour and with less natural sugar. In this case the tobacco develops more flavour than the filler Virginia, which is the reason why at Mac Baren we call it a flavour Virginia. This kind of tobacco is, by many pipe smokers, referred to as Red Virginia.

So which of the two Flue-cured tobaccos are the best? Well, to come forward with an intelligent answer would be impossible, because it depends on which characteristic you want the blend to end up with. So, in short, we are using both filler and flavour Virginia with great enthusiasm.